PORTal is an Augmented Reality geolocation driven audio work commissioned by the Rockhampton Regional Council. The  artwork on permanent exhibition outside the new Rockhampton Customs House smart hub. Use your phone on tablet to access the art work by entering http://portal.rockhamptonartgallery.com.au into your browser. 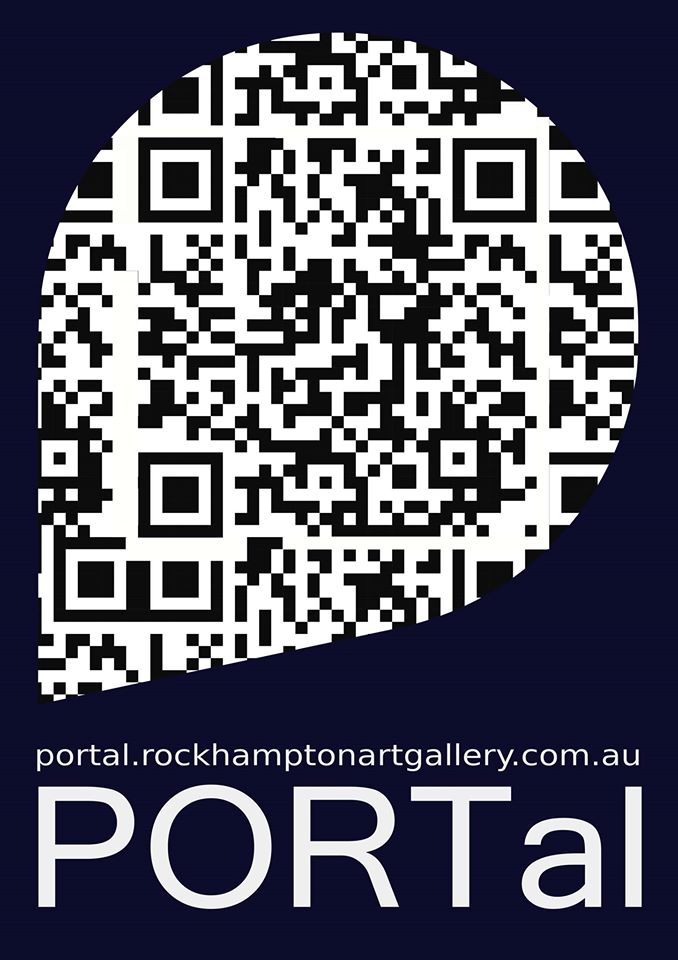 PORTal is an imagined future technology that can listen back to the past. It uses contemporary web technologies to provide an experience in a well understood paradigm, a smart device web application.

It seems fitting that for one to reimagine the past. The future must also be imagined. Which led to the idea of playing with time. What is the future? What is the Past and What is Now. Esoterically this presents a lavish garden of ideas.

PORTal is a pun on the works content concerning the Rockhampton Port, the nature of the science fiction element, a portal technology to look into the past and the porthole on a ship or boat.

Being that the future I am imaging is not too distant. A requirement of the artwork’s Science Fiction, is to be somewhat believable. Much of today’s technology is driven off the imagination of Science Fiction. With the current rate of human advancement, the line between what is and is not Science Fiction is becoming hard to distinguish.

The design of Artwork’s web application directly references present tech startup culture, design and marketing sensibilities. Stylistically the app is made to look like a convincing piece of modern or future technology. The responsive design of the User Interface is sleek and unassuming, in line with current User Interface Design conventions. Leveraging Google Maps as a geolocation technology allows for an almost instantaneous understanding of the application’s interface. Design of physical materials to drive people to use the Artwork are branded in accordance with the Web Application design and with current design trends. The visual design of Qr code technology is also leverage in the design of physical print materials to reflect on the modernity of the Artwork’s technology.

HTML5 was used as the base to deliver the work. The work is driven by Javascript utilising the Libraries, jQuery, Velocity, GoopleMapsApiV3 and MediaElement.

The 5 Audio Artworks are designed to move through the whole era of the Rockhampton’s short history as shipping port. Each work is titled by date or dates to immediately indicate the work’s historical time reference. Glitching and resonator audio effects apparent in each sound work are an effort to bring together the Artwork’s Science Fiction edge with imagined audio from the past.

1853
William and Charles Archer landed a vessel on the future site of Rockhampton. They named the river Fitzroy and returned in 1855 to settle. They built a small wharf to allow for the transport of wool bales from their property, Gracemere station. West of the place chosen as the wharf a large bar of rocks prevented further movement upstream for sailing vessels, thereby dictating the siting of the eventual Port of Rockhampton. The short lived Canoona gold rush of 1858 and its massive influx of over eight thousand diggers provided ‘the landing place’ with its first major activity of loading and unloading of vessels.

14 August 1862
Increased use of the Port resulted in the pre-fabricated Customs House and related building becoming inadequate and cramped conditions dictated the need for a new building. However, on 14 August 1862 the timber buildings comprising the Customs House including the Bond Store and Quarters were burnt down. As a result, tenders were called on 27 September 1862 for a new Customs building and this was constructed in the following year. The 1863 Customs House was a single storeyed, masonry building with a slate roof, a storage basement and a colonnaded porch facing Quay St. However the shallow foundations of the building were sunk in clay and the shifting of this strata lead to the eventual failure of the structure. A two storeyed brick bond store facing Quay Lane was constructed as part of this phase of development.

1872 – 1907
57420 bales of wool where carried by ship from Rockhampton from 1897 to 1907. The discovery of gold and copper at Mount Morgan in 1881 had a significant impact on the wealth of Rockhampton converting it from a small river port town to a thriving city. Steamers where where primarily used to transport cargo.1915The Mount Morgan gold rush had brought wealth and prosperity to the city. Annual Regattas where a common display of aristocratic wealth. The port had begun to slow down due to the river’s depth and the expense of dredging.The competing deeper ports of Gladstone and Port Alma where more attractive to current shipping activities. The development of railways through out the region where beginning to provide a convenient way of shipping goods and resources to the deeper ports.

1939
Rockhampton had become a modern regional city with steady growth. Purrey steam trams ran on a number of routes throughout South Rockhampton, totalling 10 kilometres (6.2 mi) of track. The discomfort of passengers riding in steam trams in a tropical climate in part led to their demise in 1939, replaced by a bus network run by the City Council. During the Second World War, war ships and supply vessels navigated to the town reach. However the advent of bulk shipping accelerated the decline of the area of the town wharves. In the 1960s major upgrading of the Port Alma wharves was undertaken, and road connection was also provided to Rockhampton. However, this development was overshadowed by the construction of deep water bulk handling facilities at Gladstone starting in the 1960s and accelerating through the 1970s and 1980s. The Rockhampton river port and town wharves were closed to shipping in 1966.

Construction of the audio pieces where made by running up to 8 channels of looped samples. The loops where mixed live with various live effects running as return tracks or directly effecting the master mix.